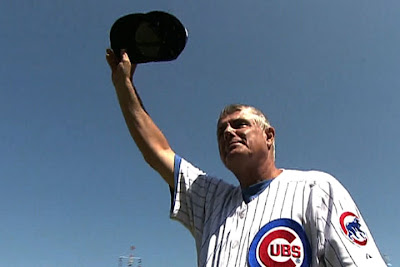 I think every Cubs fan has shared that sentiment more than a handful of times on any given day during any given season, so to hear it from an emotional, albeit laughing, Lou Piniella as he gave his final press conference today after Chicago's 16-5 loss to Atlanta, felt sadly appropriate.

What doesn't feel appropriate is the way Piniella is leaving after spending a half-century in baseball, and as abruptly as his spectacular career ended today, I didn't want Lou to pass into history without saying a few words ... OK, more than a few.

It's been a rough year for Piniella. Watching the offseason's high expectations fizzle into a team that hasn't been above .500 all season is tough enough. But his good friend, George Steinbrenner, passed away, he's had to take a leave from the Cubs to attend his uncle's funeral just a few weeks ago, and another to be with his 90-year-old mother, whose health is failing.

It's to be with his mother that Piniella has chosen to step down today, rather than at the end of the season as he announced last month, and to keep from being a distraction to the Cubs.

On the surface, today felt good, it felt right. After all, it was a beautiful, high-sky summer day at Wrigley Field, perfect for a swan song -- "I noticed things around the park I hadn't noticed before," said Piniella. "I wasn't daydreaming, but I was very cognizant of the things around here."

And there was Braves manager Bobby Cox in the opposing dugout. He's retiring after this season and a legendary career, too. Cox has 2,485 wins in 29 years as a manager, while Piniella finished with 1,835 wins in 23. So it was a classic scene when both iconic skippers brought out the lineup cards before the game, an event that was already set up to honor Cox's final game at Wrigley, but became twice as nostalgic after Piniella's pregame announcement.

And there were the fans, cheering the scene between Piniella and Cox that caused the Cubs skipper to momentarily break down as he doffed his cap to the crowd. There was the ovation the crowd gave Piniella after he made a pitching change in the seventh inning. And there was Piniella's final press conference -- "This is the final final," he said -- during which he broke down with genuine emotion, but interjected classic Sweet Lou humor along with the passion that had defined his career and now fittingly closed it.

But underneath it all, things felt unsettling. Cox is riding a wave of success and will likely be headed to the postseason in his final year before retirement, all the while enjoying a memorable farewell tour that has been full of tributes, honors and well-wishes at every stop. Even here, at Wrigley, the right-field Miller Lite billboard paid tribute to Cox with a “BRAVO BOBBY! CHEERS TO 29 YEARS!” shout out.

But where is Lou's farewell tour? Where are the tributes and accolades for one of baseball's most memorable characters and a skipper who won three Manager of the Year Awards, a pennant and a World Series title? Most recently, as Cubs.com's Carrie Muskat has noted nicely, he's the first Cubs manager in a century to lead the team to consecutive postseason appearances -- helping to "raise the bar here for the entire organization," as general manager Jim Hendry said -- and has been in uniform since his first season as a player in 1962. 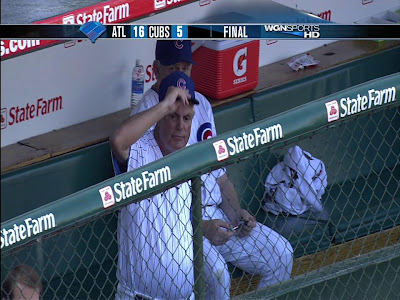 I certainly have nothing against Cox, because he deserves this sendoff, this feeling of closure. But Lou does, too, and it's hard to be stuck with the memory of his final exit from a baseball field being a quick tip of the cap to Cox, and then subtly disappearing into the tunnel to the clubhouse after an ignominious defeat.

I guess I've always had a soft spot for Piniella. After all, we go way back. Mom and Dad like to tell me I sat right behind Lou in right field during the 1976 World Series at Riverfront Stadium -- I was five months from being born, but still. And we loved him here in Ohio, when he led the Reds to their World Series title in 1990.

So when he came to manage the Cubs, I remember thinking how fitting that was, and what a perfect sendoff this could be for the guy -- leading this team to its first World Series title in, we all know how long. That was the way I felt Piniella would and should go out, drenched in champagne and doffing his cap to the crowd as the toast of Chicago and the baseball world with a big Lou grin, not tears.

Instead, it was a more fitting Cubs-like send off ... You see, Piniella's final season also began with a 16-5 loss to the Braves. To bookend his final chapter with this ugly symmetry, not being able to leave on his own terms and going through an emotionally tough time in his personal life is not the way any baseball fan would have liked to see him walk off into the sunset.

So having felt a little gloomy all day, I'm going to feel sad about this for a while. And I think baseball will as well, because the game needs the old-school guys like Piniella, like Cox, who bring us a glimpse and a feel for a different era, keeping us connected to the game's rich past.

I hope he stays involved with baseball in some capacity, I'd like to see him in the broadcast booth again. But soon I'm going to start looking forward to the day when he takes, what I believe to be, his rightful place in Cooperstown.

He'll deliver his induction speech in classic Sweet Lou style. It will be genuine, it will be passionate, it will be funny and, as Terence Mann says, it will remind us of all that once was good, and it could be again.
Posted by Jeremy at 1:27 AM

Lou definetly has the credentials to be inducted into the Hall of Faem, but out of all his accomplishments as a manager, it should never be overlooked that he is the only guy in a hundred years to take the Cubs to the playoffs in consecutive seasons.

I linked over here from your HuffPost note. Nice comments about a consumate professional, fierce competitor and an all around credit to a sport that needs many much more honesty in the executive ranks than it often displays. I agree, he should be a lock for election to the Hall of Fame.

Nicely said, Jeremy!
It seems as though Lou was always around somewhere when each new season began--and, in fact, he was!
Since I was a little kid just starting to learn about baseball--about 50 years ago...Lou was just starting his career. And through all the landmark moments of my life--graduations, jobs/career, marriage, births of children, their graduations and independent lives--Lou was making his mark in baseball...FOR baseball! A long, long time to be in any sport--and Lou will be remembered as one of the great ones!
I'm sure that he would appreciate the words and sentiment you expressed in your remembrance!
OldGrandDad

"But...Where are the tributes and accolades for one of baseball's most memorable characters and a skipper who won three Manager of the Year Awards, a pennant and a World Series title?"

Certainly, they are right here at "This is This". If you write it...

Hopefully, the baseball world will see it, and feel it and know it. Kudos to one of the good guys, and to you for saying it.